Bat Memories Part One: Where did it not go right? 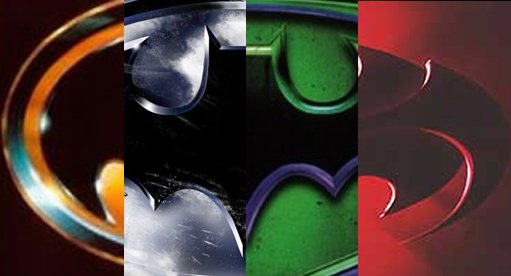 As a child in the 1980s, I was a fan of the 60s TV series Batman, regularly watching it at weekends and humming the theme tune.   Strangely, I took the show seriously, not recognising the camp tongue-in-cheek humour for what it was.  This might have been because my mother was quick to point out that it was pretty much a comedy, but I was convinced this was a serious show, at least as serious as the animated series I watched such as Transformers, He-Man and the Masters of the Universe, Thundercats, M.A.S.K, The Centurions, and other productivity siphons that contributed to my wasted youth.  I was, however, not a fan of comic books, and although I enjoyed animated adventures of Spider-Man and his Amazing Friends and The Incredible Hulk, Marvel and DC largely passed me by.  The release of Tim Burton’s take on the Caped Crusader largely missed me as well, possibly because it was the first film to be awarded 12 by the BBFC and I was only ten at the time.  Hearing about it being dark, featuring the Joker (who I didn’t much care for, much preferring the Riddler), and Batman having a (shock! horror!) girlfriend rather killed any interest I might have had.  It was not until the film appeared on terrestrial TV and I finally checked it out that my own love affair with the Bat began.  As an amusing contrast to the parental admonishment of the TV series Batman being rather silly, my father was tempted to turn the movie Batman off partway through because he thought it was too “horrible” for boys of ten and fourteen, as my brother and I were at the time.  Imagine if we had been watching The Dark Knight.  C’mon, Dad, why so serious?

Tim Burton’s Batman opened my eyes to the possibilities of the character, the setting and the premise of the self-made superhero.  As is doubtless the case for many people, Batman is particularly compelling because of his lack of superpowers, relying on human strength, speed and skill, combined with intelligence, integrity, ingenuity and sheer commitment to battle evil and save the day.  Here, I think, is where Christopher Nolan’s trilogy has struck just the right point, building upon its premise of Bruce Wayne and Batman in ever-widening and enriching stages.

In preparation for The Dark Knight Rises, I made a point of re-watching all the previous films.  Burton’s Batman and Batman Returns have not aged well, both seeming rather tame in comparison to more recent fare, and indeed Burton’s other work.  It is interesting that in its day, Batman was regarded as dark and brooding, when it regularly undercuts its own malevolence.  Jack Nicholson’s Joker has the potential for deranged menace, but lacks viciousness and resolve, seemingly just messing about.  Danny Elfman’s score has moments of menace, but slips into carnival mode quite regularly.  More problematically, Burton seems to have little flair or indeed interest in action sequences.  The flight of the Batwing is entertaining, but not dynamic, and Batman’s fights with various thugs involve mostly single strikes rather than elaborate combat.  There are meditations on identity running through Batman, but they receive only sporadic manifestation.

Batman Returns is much more Burton and much less Batman, right from the opening shots of the Cobblepot home swathed in snow, looking not unlike the house from Edward Scissorhands.  Indeed, Batman Returns could have called Oswald Flipperhands, as the character of the Penguin is a tragicomic figure that could have warranted his own film had he not had to waddle back into villainy.  Similarly, Selina Kyle’s descent into madness as Catwoman is compelling to watch, but frustratingly curtailed by her need to be an antagonist to Batman.  If anything, Batman is in the way of the more interesting characters and story, a common problem with superhero films.

Of the 20th century Batman films, I believe that Batman Forever actually gets the balance right.  It is not dark, brooding or serious, and it does not need to be: it’s a straightforward action adventure in which people happen to dress up.  Batman Forever belongs to the same cycle of 90s family blockbusters that includes Jurassic Park, Independence Day and Men In Black (much as Nolan’s saga is very much of its era, on which more later).  Rather than the Gothic sensibility of Burton, Joel Schumacher embraces garish neon and camp fun, yet maintains enough conviction to his possible world that nothing seems out of place, from Jim Carrey’s gurning to Chris O’Donnell’s earnestness.

What I think is particularly effective about Batman Forever is that it maintains an inner and outer conflict for our cowl-wearing protagonist.  Batman must battle Two-Face and the Riddler, but Bruce must also battle his inner conflict over the necessity of Batman.  The flashbacks to his childhood and his desire for normalcy, or at least human contact, make Batman Forever a compelling and even moving story about Bruce Wayne himself.  Schumacher delivers flashy action sequences as well, and these work because there is a sense of danger for a character who will not resolve matters simply by sending the bad guy to jail.

Of course it all goes horribly wrong with Batman & Robin, described by some as “the worst film ever made”.  I think that’s going too far, but it is dreadful.  The main problem is tone – everything that takes place is stupid, but the film seems to be denying the stupidity, as though it is embarassed to admit it.  It’s a rare thing, a film that is embarrassed with itself, but I think Batman & Robin pulls it off.  Were it an out-and-out comedy it might work, because everything is so camp and silly that it could easily be funny.  If all the cast played it straight that might help, which George Clooney does do, which might explain why he’s the best thing in it.  But it seems that Arnold Schwarzenegger and Uma Thurman are trying to out-ham each other, while Chris O’Donnell and Alicia Silverstone apparently grin and bear it.  Overall, it feels as though, characters, plot, direction and set design have wandered in from different movies, resulting in a garish, ghastly mess.

The one aspect that is actually interesting is the relationship between Bruce and Alfred.  There are glimmers of the emotional thread that could have run through the film, with Bruce’s memories of Alfred helping him when he was small, and Alfred’s wisdom on family, a rich theme with great potential.  If Schumacher is to be believed, interference from marketing and suchlike corrupted the film he wanted to make, and it is interesting that elements of that do remain.

The redeeming feature of Batman & Robin raises the question of supporting characters in the 80s and 90s interpretations of Batman.  Although other actors came and went, two of the less iconic and equally essential characters remained throughout: Commissioner Gordon (Pat Hingle) and Alfred (Michael Gough).  It is perhaps telling that neither had complete names (until Batman & Robin, when Barbara Wilson refers to Alfred Pennyworth), and were largely there as narrative functions.  Gotham needs an upright figure of law and order, and Bruce needs someone to help him.  Otherwise, these characters contribute little.  Similarly, Gotham City and its inhabitants are only treated impressionistically, little detail contributed to the city as a thematic element within the diegesis.  By contrast, in the few comic books I have read (Batman: Year One, The Killing Joke, The Dark Knight Returns), Gotham’s urbanscape, sociology, population and the relation of Bruce Wayne/Batman, along with the other major characters, to the overall environment, are thematically inflected and dramtically rich.

Overall, the earlier Batman films largely feel like missed opportunities.  From a design perspective, Burton did plenty; thematically Schumacher explored some interesting tensions; but for the most part, there was so much more that could be done.  Perhaps we should be grateful that Batman & Robin was so bad, because it compelled Warner Bros. to start again.  What came next will be the subject of the next entry (and that will contain spoilers, so make sure you watch The Dark Knight Rises pronto!)