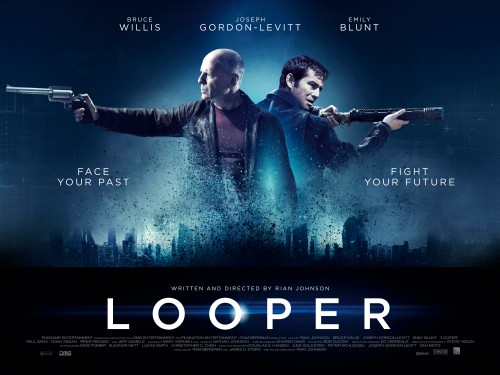 A late release of 2012, which I expect to be one of my films of the year, arrived with high expectations as to its quality.  Rian Johnson’s Looper is, unusually, not a sequel, nor a prequel, nor a franchise instalment, a reboot, a remake or even an adaptation, but that rarest of films, an original mainstream movie.  I found Looper an excellent sci-fi thriller, which used its time-travel conceit to effectively fuel its gangster setting and explore themes of freedom, destiny and responsibility.  As Old and Young Joe, respectively, Bruce Willis and Joseph Gordon-Levitt convey excellent contrast between naïve nihilism and desperate hope, while Emily Blunt, Paul Dano, Noah Segan and Jeff Daniels provide sterling support, and Pierce Gagnon is thoroughly creepy.

Johnson’s style is unusual for an action film, favouring longer takes and a more measured pace than might be expected.  The style is, however, effective, as rather than being caught up in frenetic action sequences, the film lingers on the consequences, both physical and mental, of violent action.  We are used to seeing Bruce Willis wipe out a room’s worth of armed thugs, but at several crucial moments, Looper pauses to allow contemplation of what is about to come, and at one point denies showing us the kill.  Instead, Joe’s face(s) shows the impact of what he has done, experience steadily etched into both, one youthful, the other aged, but both deeply pained.

Consequence is crucial, as the time travel conceit of Looper is deeply concerned with the impact of one’s actions, responsibility for those actions, and consideration of what impact actions have upon the future.  Looper can become confusing if you think about its temporal mechanics too much, as Abe (Jeff Daniels) mentions.  But it also uses these mechanics to motivate the overall plot and individual scenes, including a thoroughly nasty yet remarkably bloodless torture scene, and an emotionally powerful conclusion that emphasises personal responsibility.  Whether the laws of causality would allow such attempts to change the future by altering the past is debatable, but that’s why we call it science fiction.  However, the resonances with other science fiction films is quite striking, as it is easy to relate the film to others that are similar and yet different.

I am not alone in this response, as without pre-existing material to base expectations upon, the buzz surrounding Johnson’s third film seemed desperate to relate the film to other films, particularly in the science fiction genre.  It makes sense to form associations through the time travel trope: Looper explores time travel in a similar way to The Terminator and Terminator 2: Judgment Day, Donnie Darko and Twelve Monkeys.  All involve a traveller from the future who attempts to change the future by altering events in the past.  Stylistically, Looper is very much its own entity, not as smooth as Cameron’s cyborg opus nor as trippy as Kelly’s debut or as skewed as Gilliam.  A hard edge runs throughout Looper, perhaps echoing Johnson’s debut, high school noir Brick that also starred Joseph Gordon-Levitt.  The measured pace restricts the visceral thrill of Looper’s action sequences, and the brutality of the film’s gangster setting is maintained, creating a grim and oppressive atmosphere.  This brooding, malevolent oppression is in constant tension with the conceit of being able to change your destiny, through time travel or any other means.  Looper’s grimness distinguishes it from Back to the Future, which is far more light-hearted and, furthermore, that film’s time travel and temporal causality is accidental rather than intentional.  A more recent comparison is Source Code.  Like Looper, Source Code involves an individual trying to change the past within a context that works against him and places him in terrible danger.  Unlike Looper, Source Code is more concerned with alternate time lines than actual time travel, but both play to the conceit that one man can make a difference, face the past and fight the future (hang on, isn’t that Looper’s tagline?).

Other films that have been related to Looper include The Matrix, Children of the Corn, The Adjustment Bureau and Blade Runner, and these seem less obvious.  A dystopian future need not always echo Blade Runner, and Looper’s largely rural setting is very different from Ridley Scott’s noir cityscapes.  Only the final act bears resemblance to Children of the Corn, as Looper brings horror into its already potent genre mix of gangster, chase thriller and sci-fi.  It is testament to Johnson’s skills as a writer-director that these elements integrate rather than clash – much like Argo, Looper performs an impressive balance between potentially disparate elements.

To compare The Matrix with Looper is strange, as the film’s subject matter as well as Johnson’s style is very different to the Wachowskis.  While there is an element of mind-over-matter in Looper through the telekinesis of various characters, in The Matrix that element is part of the artificial reality, which is not a feature of Looper at all.  Looper and The Matrix both involve men with a lot of guns, but that is hardly a distinctive feature.  Similarly, as Looper is an intelligent sci-fi film with some complex ideas, an obvious reference point is Inception.  Indeed, a moment in the trailer in which objects levitate reminded me of the famous upward tilt of a street in Inception, but when I saw Looper itself there was very little that reminded me of Christopher Nolan’s dream heist film.

Why is it so hard to take a film on its own without reference to other films, and why is it so easy to make these inter-textual connections?  Saturation may be partly responsible, especially in an era of cross-media platforms where films, TV series, video games, music videos, webisodes, trailers, advertisements and YouTube videos assail us from every screen.  But such inter-textual references are hardly new, as studies have demonstrated how major texts from Gothic literature such as Frankenstein fed into the work of later writers like Jules Verne and H. G. Wells.  Subsequently, this literature fed into science fiction films from A Trip to the Moon and Metropolis, to The Blob and The Day the Earth Stood Still, to Forbidden Planet and 2001: A Space Odyssey, Star Wars and Blade Runner, The Matrix, Inception and Looper.  Science fiction is inherently inter-textual, as any science fiction film seems influenced by others and may well have been, consciously or unconsciously on the part of the filmmaker.  As sci-fi consumers, we link one text to another as part of our textual understanding.  As another example, when I recently saw the remake of The Day the Earth Stood Still (which was not as bad as I feared it would be), while being very different from the original film, it also looked to have been influenced by Independence Day, Close Encounters of the Third Kind as well as E.T: The Extra-Terrestrial.  Similarly, Looper is perceived and understood as a science fiction film in relation to other science fiction films, so critics and audiences alike forge these links as part of our understanding of the science fiction mega-text.  This works in several ways, as audiences are savvy enough both to see the commonalities between films like Source Code and Looper, and to create their own links between Looper and The Matrix or Inception.

These inter-textual references, not to mention marketing and commentary, created expectations for Looper.  Not being a franchise instalment, marketing was more moderate and I only noticed the trailer and posters.  But reviews had an influence: Total Film, which I tend to agree with, gave Looper a five star review and described it as the best sci-fi film since Moon, while Empire also gave it five stars and compared it favourably to Repo Men, Surrogates and In Time.  The BBC’s Mark Kermode was positive but more reserved.  Overall, critical reaction was very positive, so one could go into Looper expecting something good.

Precisely because of its non-franchise status, I was not sure what to expect of Looper except that it be very good, based on the reviews that I encountered.  Most years deliver a major film which is not based on pre-existing material.  Looper was the original oddity of 2012, much like Super 8 in 2011, Inception in 2010 and Avatar in 2009 (Avatar can be accused of being unoriginal, but it is not an adaptation of any previously published property).  Super 8, Inception and Avatar were all among my favourite films of their respective years, and they are also all sci-fi.  The link I made for Looper therefore was with earlier favourites of mine, and I expected the film to blow me away as those had.  It is perhaps unsurprising that it did not, as Looper is not an emulation of those films and, overall, I do not think it is as accomplished.  Super 8 created a convincing, believable community that was afflicted with something very strange; Inception used its high concept to explore issues of grief and memory while also being meta-cinematic; Avatar re-invigorated cinema and performed a spiritual call to arms.  Looper merges genres in an intriguing and cohesive melange, but I did not feel it offered me the combined emotional and intellectual satisfaction of those previous films.  Looper has much to admire and to enjoy, regardless of what it is like and unlike, but once again, expectations were too high and had a negative effect upon my appreciation of the film.  That said, I imagine it will be rewarding on repeat viewings, and like Prometheus, should be an interesting film for philosophical discussion.