Home » Uncategorized » To Infinity, and Beyond: Science Fiction Countdown – 4

To Infinity, and Beyond: Science Fiction Countdown – 4 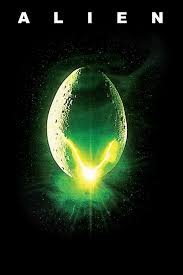 My countdown for my top five transportative sci-fi films continues with Ridley Scott’s haunted castle-in space movie, and a reference to an Alien wannabe. The tagline for Event Horizon is “Infinite Space. Infinite Terror”, but unfortunately that film is not very scary. However, apply that tagline to Alien and you have an accurate description. Alien transports the viewer to strange and threatening environments, never letting up the sense of dread and impending danger even when nothing explicitly threatening takes place. Space itself looms throughout, from the slow crawl of the opening credits to Ripley’s final message, the blank, empty void providing a palpable sense of indifference to fear, suffering and life itself. The planet (subsequently named LV-426) where the crew of the Nostromo encounter the alien spacecraft is hostile and threatening, while the craft itself provides an eerie tomb for the fossilised space jockey. The sequence’s magnificent production design, engulfing cinematography and ominous score create a ghostly atmosphere for a menacing environment. Most terrifying of all is the Nostromo itself, an industrial castle filled with dark spaces both cavernous and claustrophobic and occupied by monsters both humanoid and extra-terrestrial, as well as an unsympathetic governing presence in the form of MUTHR, that represents the malevolent absent landlord, the Weyland-Yutani Company. While these tropes may owe more to horror than sci-fi, Alien’s use of space (pun intended) transports the viewer into a realm of fear and wonder, where you can scream all you want, but… You know the rest.