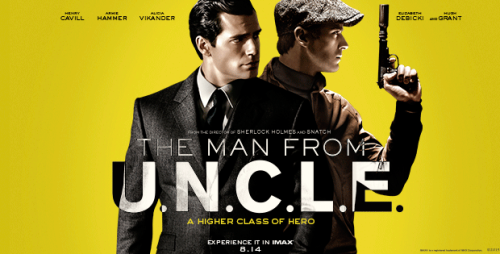 2015 has proved an interesting year for secret agents. Kingsman: The Secret Service did for spy films what Kick-Ass did for superhero films; Spy had the courage to place a non-conventionally shaped protagonist at the centre of its drama; Mission: Impossible – Rogue Nation gave us more Cruising adventures. But before James Bond graces us with his presence once more in Spectre, spy fans could do a lot worse than Guy Ritchie’s adaptation of the 1960s TV series, as The Man From U.N.C.L.E. proves a smart and stylish entry to the genre. What makes The Man From U.N.C.L.E. stand out from the crowd is its deliberately arch humour and expressive production design. To accuse the film of valuing style over substance would be to miss the point, as the film makes substance from its style. Each costume of CIA man Napoleon Solo (Henry Cavill), KGB operative Illya Kuryakin (Armie Hammer) and their German charge Gabriella Teller (Alicia Vikander) illustrates not only something about the character(s), but also the excessive design of the genre, such as James Bond’s tuxedo and the glamorous outfits of lady lovelies from Diamonds Are Forever to Mission: Impossible – Ghost Protocol. The biggest action set piece has more emphasis on screen divisions and crosscutting than on the action itself. Rather than detracting from the narrative, this stylistic emphasis plays up the film’s affection for the genre and its history. For fans of the spy genre that enjoy reveling in its absurdity, The Man From U.N.C.L.E. offers much to enjoy.

By vincentmgaine in Uncategorized on August 23, 2015.
← Fantastic Four Trainwreck →