Film adaptations of Shakespeare’s plays face both a problem and an opportunity. Deviate too far from the source material and you will both anger the devotees and the dialogue will jar with the images. Stick too close and your film may be too static and uncinematic. Justin Kurzel’s Macbeth negotiates this issue impressively by mining the source text for meaning and expressing this meaning in gorgeous cinematic form. Kurzel and screenwriters Jacob Koskoff, Michael Leslie and Todd Louiso use Shakespeare’s language with compelling intimacy, dialogue scenes framed in close-up while the performers largely whisper as though weighed down by the landscape around them. And what landscape, DOP Adam Arkapaw lensing the Scottish highlands in compelling depth and often colouring shots in deep, brooding red. Mist regularly shrouds the moors and mountains, through which the characters move as if in a dream, especially the witches whose supernatural qualities are merely suggested. This suggestion adds to the damaged psyche of Michael Fassbender’s mesmerizing Macbeth, traumatized by deaths on the domestic and military front. The film does not clarify whether Macbeth and Lady Macbeth (Marion Cotillard) are motivated by supernatural forces or their own psychological torment, a major aspect of the play that receives distinctive cinematic form. There are many such aspects in this production, which combine into a brooding, bloody and ethereal experience, of a type that is best achieved on screen rather than stage. Macbeth thus demonstrates the continued potential for the Bard in cinema.

“Ghosts are real” insists heroine Edith Cushing (Mia Wasikowska) in the opening voiceover of Guillermo Del Toro’s spine-tingling Crimson Peak. The viewer of this simmering gothic romance has little trouble believing Edith’s assertion, as ghosts appear in such crawlingly tactile form that you may check there are no cold fingers touching you. Nor are these apparitions out of place, as Kate Hawley’s sumptuous costumes and Thomas E. Sanders’ lustrous production design immediately draw the viewer into an evocative supernatural world. Playing as an unabashed haunted house story, Crimson Peak unfolds with confidence and cunning, as Edith finds life with her new husband Sir Thomas Steele (Tom Hiddleston) and his sister Lucille (Jessica Chastain) to be far from comforting. Del Toro rewards expectations by playing to the genre, utilizing his love for ghosts and monsters and sharing these with the viewer. Along the way there are moments of brutal violence and sinister motives, as well as tensions around modernity and tradition, gender, nationality and class. The result is a heady and potent mix, lovingly rendered and gorgeously presented in another triumph for this distinctive auteur. 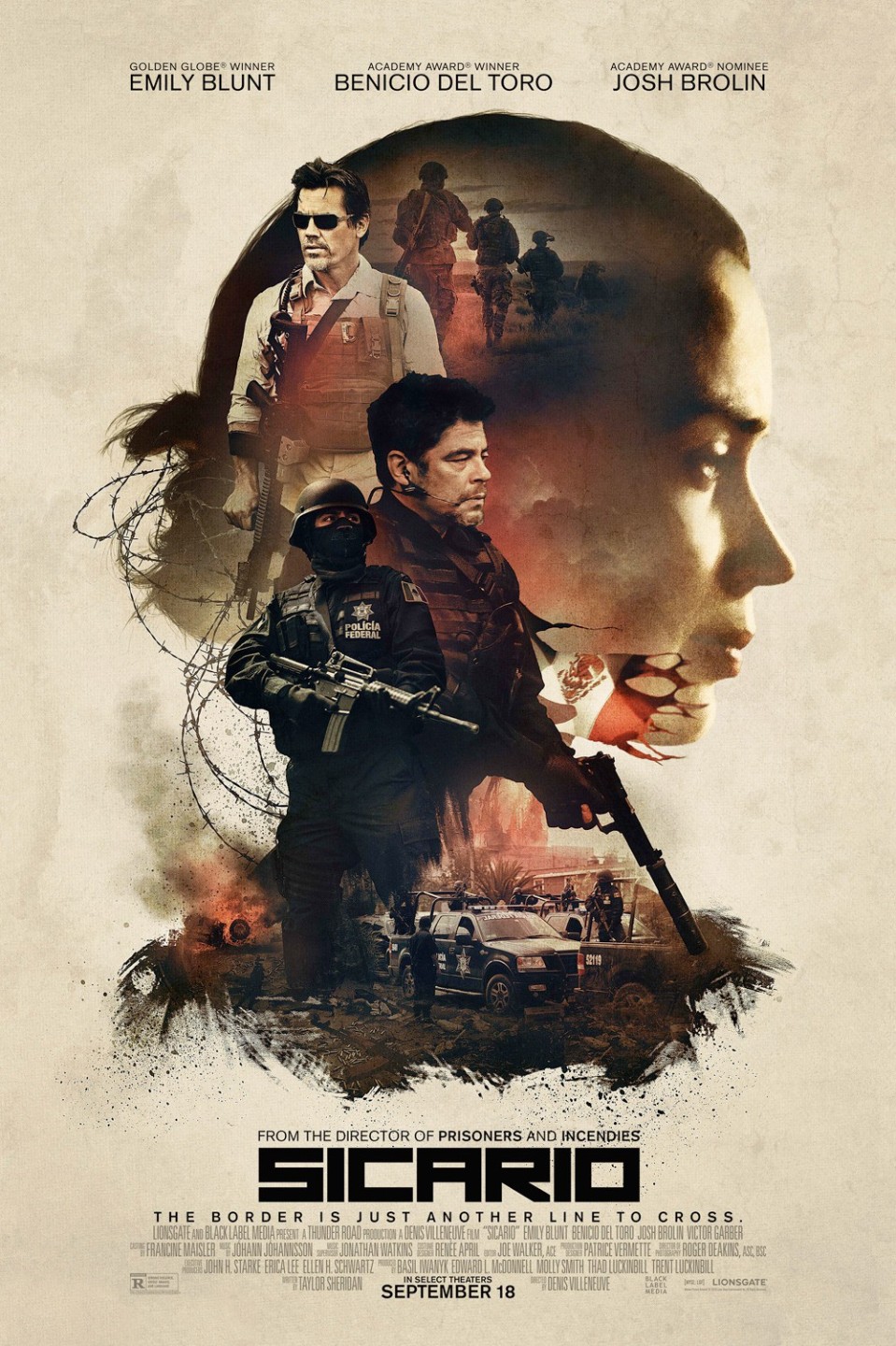 Sicario is a film about liminality, that which exists in a phase between states. The film’s liminal features includes the geographical borderlands between Mexico and the United States, the people who are somewhere between police and military, and a practice of law enforcement that is at best legally dubious. FBI agent Kate Macer (Emily Blunt) joins a special task force headed by government agent Matt Graver (Josh Brolin), only to become increasingly disturbed by the missions of Graver as well as the mysterious Alejandro (Benicio Del Toro). The viewer’s discomfort also increases, as director Denis Villeneuve creates some incredibly tense set pieces that often erupt into shocking violence, all delivered unflinchingly so that we feel the impact of bullets and the smack of wet blood. Much of the film’s power can be credited to director of photography Roger Deakins, who previously worked with Villeneuve on Prisoners. The desert landscapes are rendered in exquisite detail that is both beautiful and terrible, both at ground level and in remarkable aerial shots that serve a narrative purpose of showing us drone footage used by the task force, and a stylistic purpose for showing the bleak pitiless of the landscape. A night raid begins with the team descending from a gorgeous sunset into an inky blackness, all within a single, static shot. Multiple camera types convey this sequence, including infra red and night vision as well as normal digital photography, and yet this extra visual detail adds to the confusion and sense of other-worldliness. Similarly, Jóhann Jóhannsson’s score is menacing and invasive to the point of being oppressive, as the film moves into ever more murky territory. Sicario does not succumb to genre clichés as Prisoners did, debut screenwriter Taylor Sheridan instead maintaining the story’s conceit of liminality as well as its grim tone, as the placement of Alejandro and Macer’s position towards the events she witnesses and participates in remain ambiguous. Whereas crime thrillers of this sort often feature some measure of hope or at least catharsis, here the viewer is left with a sense of hopelessness and helplessness, a disturbing glimpse into a harrowing world where cynicism and violence are the only way of life. 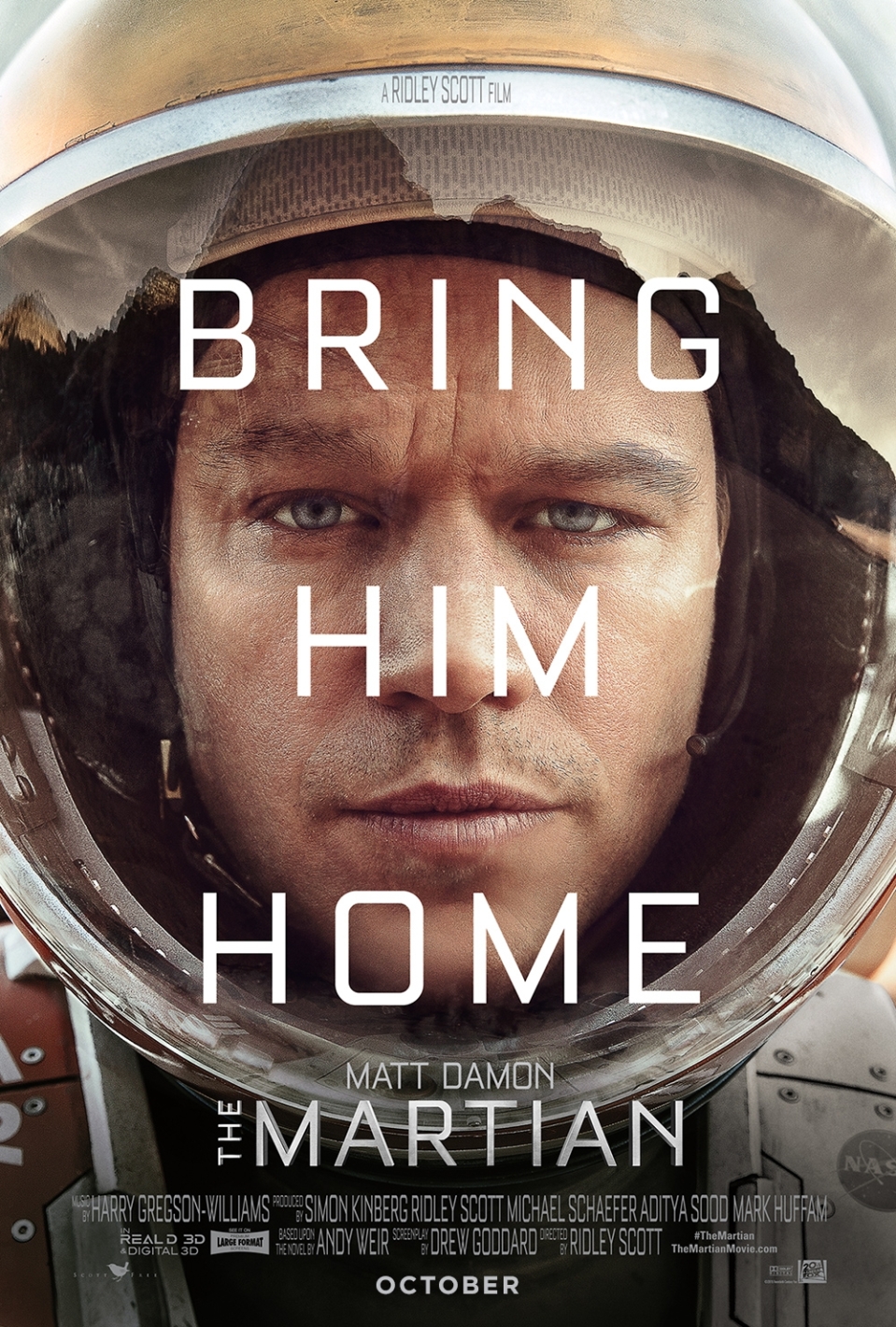 Ridley Scott’s adaptation of Andy Weir’s novel The Martian is one of the director’s most accomplished films in a long time. The film’s success is partly due to Scott’s stunning visual style, rendered in gorgeous visuals by DOP Dariusz Wolski, where vast desert landscapes express the terrible isolation of Mars, in sharp contrast to the supportive, enclosing environments of Earth. Credit must also be given to Drew Goddard’s witty and engaging script, Matt Damon’s roguishly charming performance as Mark Watney and Pietro Scalia’s smooth editing, all of which combine to keep the film flowing easily but informatively. Due to an accident during an evacuation, Watney is marooned on Mars and must ensure his own survival or, as he puts it, “science the shit out of this.” What follows is a hugely engaging portrayal of ingenuity and determination, as Watney uses his own waste to fertilise a potato patch, creates water from the requisite ingredients, and records multiple video diary entries as a record of his experience. Meanwhile, his NASA colleagues both on Earth and aboard the spaceship Hermes grapple with the personal guilt of leaving Watney behind and the practical difficulties of helping him stay alive. This singular goal permeates the entire film, and allows for fine humour as Watney comments on his surroundings, political tensions as NASA director Teddy Sanders (Jeff Daniels) clashes with department heads Vincent Kapoor (Chiwetel Ejiofor), Mitch Henderson (Sean Bean) and Annie Montrose (Kristen Wiig), scientific and engineering problems on both Earth and Mars, and some nail-biting set pieces where physics is an inexorable antagonist but also the only means of survival. Despite these apparently disparate elements, The Martian is a bravura success, a gripping and perfectly-paced survival story filled with wit, brio and invention.