Allegiance to what we see or what sees us? Vision is a recurring conceit throughout Allegiant, third in The Divergent Series. After the lacklustre Insurgent, Allegiant is a welcome return to the political uprising/growing pains drama of Divergent. Across the first two films, there was a constant sense of there being more out there, literally as Chicago is surrounded by a wall, but also narratively as to how the series’ faction system came about and what it truly means to be divergent or otherwise. Allegiant expands this dystopic world, with various explorations of vision intertwined with the trials and tribulations of heroine Tris (Shailene Woodley), her lover Four (Theo James), brother Caleb (Ansel Elgort) and loyalty shifter Peter (Miles Teller). Illusions (literally) shatter, fields of vision are expanded by technology, and revelations abound. As questions are answered fresh ones are raised, while new characters including David (Jeff Daniels), Matthew (Bill Skarsgård) and Nita (Nadia Hilker) add to the mix of followers and rebels. The film’s most striking moments are its explorations of vision, casting watchers and the watched in new lights and suggesting aspects of our relationship with what we see. Director Robert Schwentke, DOP Florian Ballhaus and production designer Alec Hammond render these explorations in a richly detailed future world, showing that there’s yet more to find in the young adult dystopia. Roll on Ascendant!

From the opening moments of Eilis Lacey (Saiorse Ronan) stepping into the street of a quiet Irish village, Brooklyn establishes its conceit of subtlety and restraint. Despite being a story of great upheaval and massive change, director John Crowley never strays into melodrama or histrionics. Screenwriter Nick Hornby’s adaptation of Colm Tóibín’s novel about immigration to New York in the 1950s is told with a steady hand, allowing the viewer to witness the trials and tribulations of this every person journey. And the easiest part of the journey is the sea crossing, despite food poisoning and restricted toilet access, in a film that is not afraid of broad humour any more than it is of taking its time. Eilis’ experience is one likely to chime with anyone who has spent extended periods away from home, and for those who have changed where they call home. Weaving its delicate yet compelling route through issues of family, community, friendship, career and love, Brooklyn is a beautifully crafted and moving portrayal of personal change.

“Through the eyes of a child” tends to evoke a sense of innocence. Lenny Abrahamson’s adaptation of Emma Donoghue’s novel Room, with a screenplay by Donoghue herself, makes use of this premise in the most extraordinary way: presenting deeply horrific events from the perspective of a child so that the viewer understands both the innocence and the experience. Abrahamson’s subtly intense direction creates a vibrant cinematic world, where Ethan Tobman’s production design of walls, appliances and furniture become a landscape as encompassing and immersive as any city or forest. Director of photography Danny Cohen lenses the film with an intimacy that is both hopeful and harrowing, the viewer never losing sight either of the appalling situation or the indomitable love that sustains Ma (Brie Larson) and Jack (Jacob Tremblay). Larson’s various awards for Best Actress are richly deserved, as she delivers a performance of strength, resolve, confusion and fragility, always captivating and never less than convincing, while Tremblay is equally impressive. Room succeeds in drawing the viewer into its unique world, ensuring that we constantly share the experience of Ma and Jack, an experience that reduced me to tears several times. The resulting experience is moving and enthralling, traumatic yet life-affirming, from this intricately designed, sublimely presented, exquisitely painful story of love.

While the 88th Academy Awards had some surprises, the acting awards were not among them and I correctly predicted all four winners. I am yet to see The Danish Girl but hope that Alicia Vikander will avoid the curse of the Best Supporting Actress award and build on her great success of last year. Her Oscar for The Danish Girl culminates her achievements in Testament of Youth, Ex Machina and The Man From U.N.C.L.E., fulfilling the potential of earlier work such as A Royal Affair. Roll on The Light Between Oceans!

Mark Rylance received his award for Best Supporting Actor in Bridge of Spies graciously and generously, especially when he described himself as a spokesman for the nominated actors rather than a victor over them. Brie Larson surprised no one with her Best Actress win, that I consider richly deserved as her performance in Room was utterly captivating. Oh yes, and we can FINALLY say Academy Award Winner Leonardo DiCaprio! While DiCaprio doubtless has many roles ahead of him, it will be interesting to see if he takes easier roles in the future or if he continues to explore strange and interesting parts like that that in The Revenant. I suspect and hope the latter. 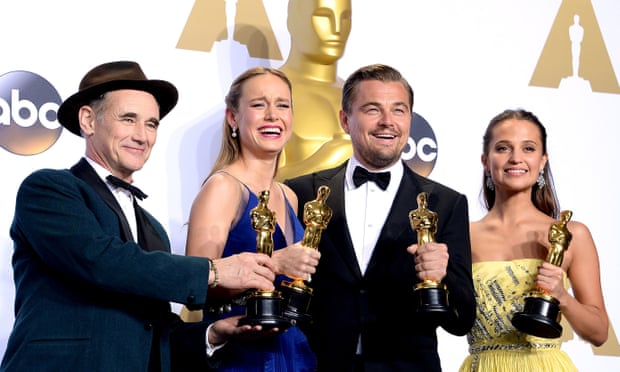 In his acceptance speech, DiCaprio spoke eloquently about the destructive attitudes that The Revenant highlights, and emphasised the need to work together against climate change and the politics of greed. He was far from the only political speaker at the ceremony, as various presenters and winners took advantage of the grand stage to urge for political action. Best Director Alejando G. Iñárritu urged for greater respect and recognition for people of all races and ethnicities, while various presenters took shots at the policies of Donald Trump.

After the controversy around diversity in the acting categories, Chris Rock made a serendipitous host. As a black comedian who frequently comments upon race, Rock took full advantage of the opportunity afforded him. His opening monologue exploited his own persona beautifully, and Rock’s jokes about diversity continued throughout the show, possibly to the extent of tedium, but overall he was funny and critical without being mean-spirited or facetious. Rock’s focus upon diversity, which other presenters and winners picked up on as well, hopefully demonstrates a desire to address this problem. But as Rock pointed out, the problem is far wider than the Oscars or the Academy, and Academy president Cheryl Boone Isaacs’ speech about AMPAS’ programme to improve diversity and support filmmakers of all races and ethnicities suggests genuine action to effect change. But don’t expect multiple people of colour to be nominated next year – change tends to be gradual.

Two other moments were particularly affecting. The first was the winner of the Documentary Short, Sharmeen Obaid-Chinoy for A Girl in the River: The Price of Forgiveness. Obaid-Chinoy’s speech about the need for and potential to battle inequality was both a sober reminder of this social problem and an inspiring message about the power of film. And in the most startlingly political moment of the night, US Vice-President Joe Biden spoke about sexual assault on university campuses across America, urging Academy members and viewers alike to join the movement against this problem. Biden then introduced Lady Gaga who sang the nominated song ‘Til It Happens To You’ from the documentary The Hunting Ground. Gaga’s performance, combined with the appearance of multiple survivors of sexual assault, was the most moving moment of the night for me. ‘Til It Happens To You’ would have made a fine winner of Original Song, but regardless, it was a magnificent performance.

Back when the nominations were announced, I commented that several of the Best Picture nominees were inward looking and critical, including The Big Short and the eventual winner, Spotlight. For the Academy to reward Spotlight in this way, as well as other films like A Girl in the River, and to have allowed multiple political statements which were not cut off by music (such as DiCaprio and Iñárritu), suggests the Academy’s awareness of film’s potential impact. AMPAS’ response to the diversity controversy, the rewarding of politically charged films and the sensitivity shown towards calls for progressive change was, for me at least, a hopeful and positive sign.

The Oscars are wrapped for another year. Once again, I stayed up all night to watch the whole ceremony, and it was TOTALLY worth it! It was a great show with significant surprises, some wonderful performances and interesting acceptance speeches.

I made 21 predictions for the Academy Awards, and was only correct in 13 categories. This is largely down to the remarkable success of Mad Max: Fury Road, which was not only a radical Best Picture nominee, but the biggest winner of the night, picking up awards for Costume Design, Production Design, Hair and Make-Up, Editing, Sound Mixing and Sound Editing. I was surprised but pleased that such a purely cinematic film was rewarded for some of its key cinematic elements. It was also amusing that every time a winner thanked director George Miller we got a reaction shot of him, as though the director of the ceremony knew Miller would not get a chance to speak himself!

Other predictable results included Cinematography, Score and Animated Feature. Emmanuel Lubezki made history with his third consecutive win for The Revenant, following previous wins for Gravity and Birdman. One day, Roger Deakins, one day. Ennio Morricone’s win for The Hateful Eight made him the oldest Oscar winner ever, and the standing ovation as he stepped up to receive his award was testament to the adulation in which this great maestro is held. Ex Machina was a surprise winner of Visual Effects, but a very welcome one. And my favourite film of last year, Inside Out, took home the Oscar for Animated Feature, which made me happy.

I also correctly predicted the winners for Achievement in Directing as well as the Writing Awards. After his Golden Globe and DGA awards, Alejandro G. Iñárritu’s win for The Revenant was in no way surprising. The Big Short‘s win for Adapted Screenplay was also expected, as was Spotlight‘s win for Original Screenplay. But like many people, I was flabbergasted when Morgan Freeman announced Spotlight as the winner of Best Picture. The success of The Revenant up to that point appeared to make it a dead cert for Best Picture, but instead, the true story of crusading journalists within an insular community picked up Hollywood’s highest award. Although this was a big surprise (and a possible indicator of Michael Keaton being a lucky charm), it does demonstrate the pattern that Best Picture winners also win one or more of Directing, Editing or Screenplay. But winning ‘only’ Picture and Original Screenplay places Spotlight in a weird category of being a numerically low Best Picture. 12 Years A Slave, Argo and Crash are Best Picture winners that received only three awards (all won Screenplay, interestingly, Adapted for the first, Original for the other two; Argo and Crash also won Editing), but the last Best Picture to win so few was The Greatest Show on Earth (1952), which also won the Oscar for Best Story.

This in no way diminishes the achievement of Spotlight, which is a very fine film and impressed me more than The Revenant. Along with the six awards for Mad Max: Fury Road, the 88th Academy Awards proved a surprising and somewhat radical bunch of winners. Long may such challenges to convention continue.