In 1993, Disney released Cool Runnings, in which 80% of the main characters were black. In 2016, Disney released Queen of Katwe, in which 100% of the speaking characters are not only black, but African. For a mainstream family film, this is quite extraordinary. There is no British or American outsider to appeal to audiences, nor a white saviour coming to save those who need it, or even a climactic trip to a First World country as some kind of ultimate victory. Instead, Queen of Katwe is a genuinely progressive portrayal of people who are typically excluded from mainstream cinema, while also being a warm, engaging and moving tale of talent, ambition and nurturing, all based on a true story.

Despite its credentials, Queen of Katwe is far from a PC diatribe. Director Mira Nair crafts a vibrant and lively tale that brings the slum of Katwe in Kampala, Uganda to energetic life. The largely young cast of first time actors are beautifully varied and a far cry from stereotypes. Some are shy and uncertain, others angry and resentful, but none are less than human, rounded and thoroughly engaging. Among them is Phiona Mutesi (Madina Nalwanga) a teenage girl who works hard to help support her family, but finds in a community chess club a previously unknown talent. Nalwanga is extraordinary in the role, completely conveying Phiona’s sense of confusion and isolation that leads to consummate attention and a fierce desire to win.

Phiona is also torn between two mentor figures. Her mother Nakku Harriet (Lupita Nyong’o) is harried and put upon, and takes some convincing that her daughter should be playing chess. This convincing comes from Robert Katende (David Oweloyo), coach of the chess club that is run as part of a community enrichment scheme. Although a qualified engineer and a frustrated soccer player, Robert finds genuine enrichment and inspiration from his young chess players, whom he dubs ‘Pioneers’. And so they are, as many of them have never been to school yet boldly embark across the uncharted squares of the chess board as well as previously undreamed-of places.

In taking his Pioneers to new places, Robert encounters class prejudices as well as harsh economic realities, not to mention the inherent difficulties of marshalling young people into a disciplined unit. Many of these scenes are played for laughs, including a particular highlight where Robert outsmarts a supercilious and patronising official. This strategising as well as Phiona’s mimics that of skillful chess playing. Throughout the film, parallels between the game of chess and the everyday life of the characters are clear but this strategy is never overplayed. In addition, however, Nair wisely avoids trying to dramatise the playing of chess itself, such as presenting chess pieces as enormous and each move on the board as hugely significant. In much the same way as Raging Bull and Million Dollar Baby are not really about boxing, and Rush about motor sport, Queen of Katwe is about chess players rather than playing chess. During the actual – and dramatically momentous – matches, Nair and DOP Sean Bobbitt focus on the faces of the players, thoughts and strategies playing behind their eyes. These sequences convey the passion and importance of the matches to the viewer, who need not be an expert or even particularly interested in chess in order to be drawn into the drama. To draw such drama from a board game of stratagem and patience is remarkable, and William Wheeler’s screenplay skilfully balances the tension with comedy, such as nervousness conveyed through hiccups. 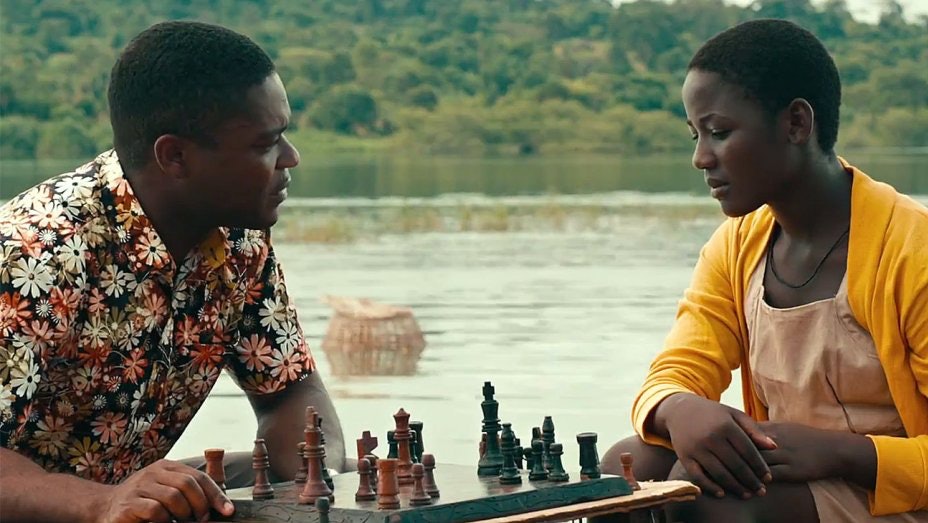 Not that chess makes everything alright, as family tensions escalate for several reasons. As mentioned above, Harriet is less than enamoured with Phiona spending so much time studying chess. And as Phiona progresses and is increasingly successful, she becomes arrogant and even contemptuous of her family. By including these aspects, Nair strikes the right balance between sentiment and grit. It would be an exaggeration to describe the film as grim, despite its shanty town setting and inclusion of such issues as teenage pregnancy, limited access to medical care and education and the threat of eviction or even starvation. Vague suggestions of prostitution are not explored and it could be fairly argued that the film has a sanitized portrayal of people living in poverty.

However, to complain about this seems churlish when the film is so refreshing in its engagement with such areas and demographics. Queen of Katwe may be the finest family film of the year, and is an important piece of work in placing non-white, non-Western characters at the center of a mainstream film. After the brilliant Zootropolis offered a hopeful and affecting portrayal of the need for diversity and tolerance, Queen of Katwe adds to Disney’s progressive credentials, which may not be expected, but are therefore all the more satisfying.

Let it never be said that I (only) do what is obvious, as there is far more to say of Antoine Fuqua’s The Magnificent Seven than how it compares to John Sturges’ 1960 film or indeed Akira Kurosawa’s Seven Samurai. Fuqua’s film warrants close examination in relation to its genre and period, rather than in terms of how it compares to what came before. Most obviously, Fuqua’s film can be read as a declaration of diversity, as the titular gang includes white, black, Mexican, Asian and Comanche members. Pleasingly, Fuqua and screenwriters Richard Wenk and Nic Pizzolatto ensure that race and ethnicity are not simply there for declarative purposes but as organic parts of the story. Django Unchained may have made a point of racial revenge, but here little is made of Sam Chisholm (Denzel Washington) being black, while Native American characters in the film are varied with Red Harvest (Martin Sensmeier) contrasted with Denali (Jonathan Joss) on the side of vicious land baron Bartholomew Bogue (Peter Sarsgaard). There is also a decent line in gender relations, as Emma Cullen (Haley Bennett) is as integral and capable as the men around her. This ensemble of characters are well-rounded, including the PTSD of sharpshooter Goodnight Robicheaux (Ethan Hawke) and his touching relationship with Billy Rocks (Byung-hun Lee), as well as a developing warmth between the seven and the townsfolk of Rose Creek who hire them. Narratively, the film is clear and detailed. So why the long face?

The problem with the film is its lack of scale. Fuqua is associated with urban thrillers such as Training Day and The Equaliser, in which his sharp, punchy style is effective because it creates a milieu of fast mouths and faster violence. During the action sequences of The Magnificent Seven, including the genuinely impressive sustained set piece that comprises the final act of the film, this style works, as it conveys suddenness, abrupt changes and viscerally draws the viewer in. But in the earlier part of the film, which introduces the characters and, critically, the setting, the pace of the editing is too fast. As a result, the environment, so crucial to the western, is not established and the film fails to place its characters and indeed viewer within the landscape. This undercuts the power of the finale, as there is little sense of stylistic progression towards this climax. As a result, we end up with a Seven that may be Magnificent, but a film that is only moderate.

I recently cited The Infiltrator as an example of films that have a pronounced interest in finance, films that could be termed post-recession films. Many of these have been thrillers, mixing financial machinations with longer established generic elements, and Hell or High Water is another of these. David Mackenzie’s film of Taylor Sheridan’s script also incorporates aspects of the western into its heist thriller narrative, as Howard brothers Toby (Chris Pine) and Tanner (Ben Foster) commit very specific and careful robberies, while Texas Rangers Marcus Hamilton (Jeff Bridges) and Alberto Parker (Gil Birmingham) perform a methodical investigation. Mackenzie’s borrowing from the western includes many wide-angled shots, shots that are sustained for long takes to capture prolonged action such as the brothers’ heists. Similarly, the Texas landscape and small, deteriorating towns express the liminal status of people caught between their ownership and what they owe to banks. Meanwhile, the film deploys the pleasures of the heist thriller through the execution of the robberies, both calculated and impulsive. Even the clichés of Hamilton approaching retirement and his constant insulting of his long-suffering partner are played as genuine rather than stereotypical. By marshaling these various generic elements with an absorbing and gripping visual style, Mackenzie has crafted an intelligent and effective thriller, as Hell or High Water imbues familiar film elements with a sober real world dimension.