Taylor Sheridan is a very fine writer. His previous works Sicario and Hell Or High Water beautifully captured the drama of people caught between social and historical developments. Much the same is true of Wind River, the third in Sheridan’s loose ‘border trilogy’. What the earlier films also had were very fine directors, and Sheridan proves himself less accomplished in this respect as Wind River lacks the enveloping dread that Denis Villeneuve brought to Sicario and the muscular doggedness that David MacKenzie delivered with Hell Or High Water. Sheridan handles his Native American reservation-set thriller solidly but unimaginatively, sometimes overusing dialogue to express the marginalisation and discrimination suffered by one of America’s most underprivileged demographics. Much of this rumination is delivered by Cory Lambert (Jeremy Renner), a hunter and tracker with a tangential connection to the inhabitants of the Wind River reservation. After finding the body of a teenage girl in the snow, Cory assists investigating FBI agent Jane Banner (Elizabeth Olsen). The subsequent investigation between these mismatched partners is functional, if problematic as it foregrounds white characters in a story ostensibly concerned with Native Americans. Sheridan does not explore the social tensions in much depth, again resorting to telling rather than showing, as well as a rather clumsy flashback that depicts escalating events that are disturbing if rather rushed. However, when the film relies on its visuals, it succeeds admirably, as Sheridan delivers set pieces that are gripping and even shocking in their suddenness, expressing the life or death urgency of the environment. And it is in the environment that Wind River attains heights as lofty as the towering peaks of the Rocky Mountains (Utah standing in for Wyoming). Cinematographer Ben Richardson lenses the landscape with awe inspiring scale, the expanses of snow and ice rendered in a splendour that leave the viewer chilled to the soul. Wind River may not offer much food for thought, but it certainly offers a feast for the eyes.

Escalating events are terrifying because of the loss of control, but perhaps even more so because of their innocuous beginnings. We can easily imagine ourselves in such events, especially when they are historically documented. Such is the case with Detroit, Kathryn Bigelow’s dramatisation of events at the Algiers Motel during the 1967 riots of the eponymous city. Beginning with an animated sequence that recounts racial tension alongside urban gentrification and migration during the early to mid-twentieth century, Detroit focuses on several character vectors that converge at the Algiers where events escalate to truly terrifying levels. The danger largely results from people being in the wrong place at the wrong time and, in several cases, the wrong colour. Bigelow deftly guides the audience through the events, as well as through genres including social drama, horror and courtroom. This is impressive enough, but the film’s greatest coup is to present the incidents at the Algiers as a microcosm of much larger events, as the viewer is kept aware of riots and broader tensions, but the film’s focus on this specific event expresses both the intimate and large scale powder kegs. Three central characters represent parts of the overall conflict: singer Larry (Algee Smith) – black victim; Detroit police officer Krauss (Will Poulter) – racist white authority; security guard Dismukes (John Boyega) – liminal figure of the black man in uniform. Radiating out are various other figures, tensions and events that escalate into steadily darker territory. Bigelow demonstrates her trademark immersive style, much as she did with The Hurt Locker and Zero Dark Thirty, often following characters with mobile tracking shots while many of the confrontation scenes are horrifically claustrophobic. The viewer may often feel that they themselves are trapped in that motel, armed cops yelling and, in some cases, doing much worse. Yet no character here is a caricature, even the ostensible villain of the piece is presented as complex and multi-faceted while the victims are not without agency. This adds to the relatability of the characters and the film’s immersive nature, for it is easy to imagine oneself in such a situation but far harder to imagine what one would do. The viewer is therefore left shaken and disturbed by the events, as indeed we should be, because equivalent events continue today, and continue to escalate. 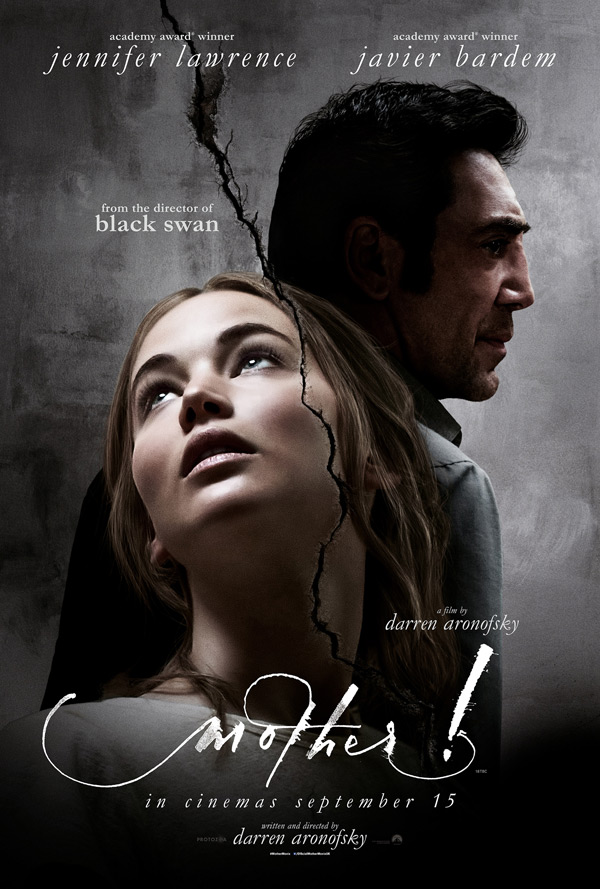 Reviewers sometimes give away films without meaning to. In the case of mother!, Darren Aronofsky’s latest cinematic experiment, it is hard to give away anything because it is genuinely hard to say what the film is about or what happens in it. About the only consistent explanation for this tale of Mother (Jennifer Lawrence) and Him (Javier Bardem) and the events in their home is that it is a cinematic rendering of psychosis, but to describe it as such feels reductive. It could potentially be a supernatural tale of raising unearthly powers, but the film’s avoidance of indicative horror tropes undercuts that interpretation. Or it could be a dramatisation of the creative process, the characters metaphors for parts of the mind, but that explanation also fails to work across the whole film. What I can say is what the film does, which is put its viewer through a relentless, gruelling and singularly extraordinary experience. Aronofsky eschews narrative logic but offers just enough plausibility to keep the film grounded, while the ever-escalating pace of his direction increases the tension to nerve-shredding levels. Long, travelling shots mix with 360-degree pans, abrupt cuts and subjective angles that place us uncomfortably inside the action that takes place in a (literally) disintegrating location. The performances are superb, especially Lawrence who is onscreen virtually the whole time, her increased franticness becoming more and more hysterical, which is of a piece with the film as a whole. Bardem offers a calm contrast that is more chilling than comforting, while Man (Ed Harris) and Woman (Michelle Pfeiffer) are suitably disturbing. Quite what is going on is very open to interpretation, as is the film’s genre that combines jet black comedy with relentless horror with Biblical allegory and fantastical sequences. The only thing that seems certain is mother! will have an effect on you, but it is a film that demands to be seen, partly because it’s a bold, experimental and genuinely surreal experience, and partly to find out just what your reaction is.

A dark tower at the crux of dimensions. A mysterious and malevolent Man in Black. A noble ‘Gunslinger’, last survivor of a once noble lineage. A boy troubled by dreams of all the above. By a remarkable feat, the long-gestating adaptation of Stephen King’s epic series manages to utterly waste all this great potential. A wealth of material for the building of multiple worlds is hinted at without exploration, while relationships between characters occur without development, be they quasi-father/son of the Gunslinger Roland (Idris Elba) and the boy Jake Chambers (Tom Taylor), or the possible history between Roland and Walter, the Man in Black (Matthew McConaughey). To make matters worse, the action sequences are inert and the horror elements sterile, the filmmakers sanitizing suspense and tension out of the film by making it family friendly. Director Nikolaj Arcel previously helmed the superb A Royal Affair as well as writing The Keeper of Lost Causes and The Girl With The Dragon Tattoo, but here he and co-writers Akiva Goldsman, Jeff Pinker and Anders Thomas Jensen have delivered a limp and lifeless mess. There are some smirks to be had at fish-out-of-water comedy when Roland encounters Jake’s (our) world, and the cast do their utmost, Elba wielding his usual charisma while McConaughey shows glimmers of the menace he brought to Killer Joe. But whatever strength these performers might have generated seems to have been left on the cutting room floor. Furthermore, the potentially handsome production design and clumsy nods to other King works (at least eight) are largely obscured by pedestrian direction and frequently poor lighting. Adaptations of beloved books face the double-edged sword of being unimaginative by sticking too close to the source material, or deviating too much and thus alienating a potential audience. This is the least of the problems with The Dark Tower, but on the plus side seeing it did make me want to read the book(s), so as to get a better idea of the potential that this stillborn turkey squanders so badly.