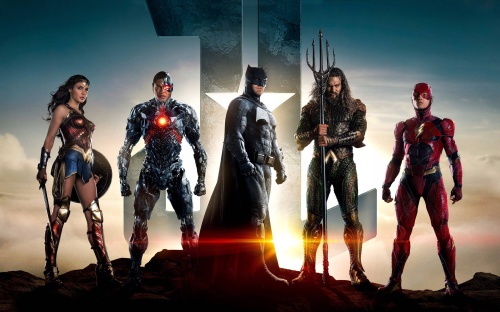 After the mixed responses to Man of Steel, Batman V Superman: Dawn of Justice and Suicide Squad, Wonder Woman demonstrated that given the right level of care and attention, DC could deliver an effective superhero film both for audiences and critics. Justice League sheds the ponderousness of BVS: DOJ and avoids the jumbled storytelling of Suicide Squad, borrows plot elements from both The Avengers and Avengers: Age of Ultron, and presents a colourful array of characters. The new arrivals – Arthur Curry/Aquaman (Jason Momoa) Barry Allen/The Flash (Ezra Miller), Victor Stone/Cyborg (Ray Fisher) – receive short shrift in the rush to squeeze everything into two hours, and would have benefitted from earlier standalone films to give them and their respective worlds more detail. The lack of balance between characters is mirrored by the imbalance between the wit of Joss Whedon and Chris Terrio’s script and the portentousness of Zack Snyder’s direction, a problem that also affected BVS: DOJ. Despite this, Justice League still manages to deliver on the promise of multiple super-powered individuals, with a sometimes dazzling display of spectacular abilities, all of which are neatly tied to character development. From Bruce Wayne’s Batman’s (Ben Affleck) array of wonderful toys (composer Danny Elfman also references his own score from 1989’s Batman) to Diana Prince/Wonder Woman’s (Gal Gadot) reluctance to lead, Cyborg’s fear over the loss of his humanity to Aquaman’s cynicism and the Flash’s youthful exuberance, powers work as part of identity, and the appropriate use of this power is a recurring conceit of the film. Some of these potential heroes have to mature into their powers, others need to be reminded of its responsible use or restraint. Against all this, poorly-rendered (in both written and visual terms) villain Steppenwolf (Ciarán Hinds) is rather underpowered despite his goal of planetary conquest, and the film’s chief pleasure is watching the members of the League bounce off each other verbally and physically. Several spectacular set pieces – one with a semi-assembled League and another with them complete – deliver smackdowns of varied spectacle and visual impact, while a neat strand of humour (largely coming from Flash) adds further pep to the concoction. Justice League falls someway short of the standard set by Wonder Woman, but it is far from kryptonite for the DCEU.

By vincentmgaine in Uncategorized on November 24, 2017.
← Call Me By Your Name Star Wars: The Last Jedi →

Leave a Reply to 2017: Review of the Year « Vincent's Views Cancel reply