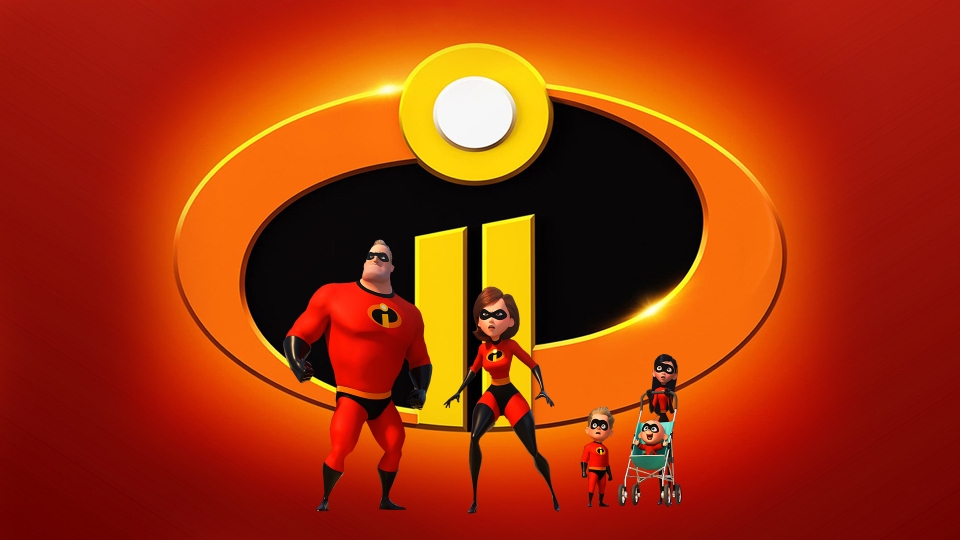 Superhero narratives have a reputation for being conservative. Terms such as chauvinistic, right wing and valorising the cult of the individual often appear in discussions of the genre. Since Pixar and director Brad Bird first presented their superpowered family in 2004, films such as Wonder Woman and Black Panther have offered alternatives to this pattern. Incredibles 2 does so as well, making it the best sort of sequel: it gives us what we know and expect and also something new. There is the same blend of action and humour, much of the latter deriving from Bob Parr/Mr Incredible’s (Craig T. Nelson) struggling with domesticity while Helen/Elastigirl (Holly Hunter) leads on the action front. In one bravura sequence, a souped-up motorcycle chases a train with the tangibility and immediacy of live action. The introduction of more supers allows for further exhilarating sequences, and the humour and action are brought together brilliantly with the development of Jack-Jack (Eli Fucile). 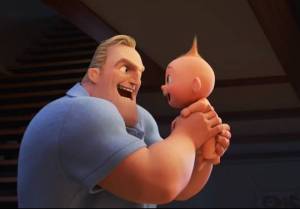 All this is great fun, but in its narrative development and also world building, Incredibles 2 displays some surprising elements. The film’s focus on Helen is not the limit of its exploration of gender, as discussions between Helen and Evelyn Deavor (Catherine Keener) as well as Voyd (Sophia Bush) raise further issues. Furthermore, Incredibles 2 also questions our engagement with technology through its villain the Screen Slaver, and while this discourse could be reduced to clichéd monologuing, it is striking that the film includes this feature. In addition, there is a curious social aspect to the presence of supers in the film’s world. When Helen and Bob consider their future, they refer to the private sector, and benevolent government agencies are shut down due to public mistrust. All of this distances the Incredibles from the more self-righteous exploits of Batman and Iron Man. If superheroes are presented as inspirational figures, especially for children, figures that want to help others and make the world a better place, Incredibles 2 suggests that the place to do that is within the purview of the state. In a time of rampant individualism and self-interest, Incredibles 2 continues Disney’s surprising messages of acceptance, tolerance and state intervention and responsibility. If the imagined nation the United States of Disney actually practiced what films such as Zootopia, Beauty and the Beast and now Incredibles 2 suggest, it might not be so bad. And that may be the most incredible thing of all. 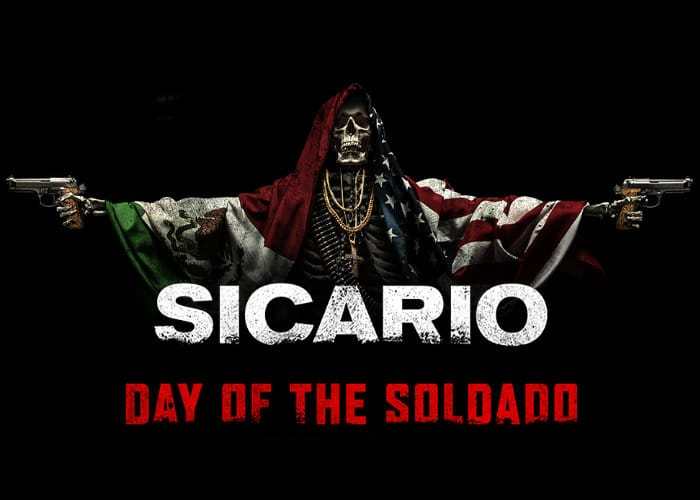 2015’s Sicario was a coming together of several brilliant talents. Screenwriter Taylor Sheridan, who also delivered great scripts with Hell Or High Water and Wind River; director of photography Roger Deakins, who drew closer to his elusive Oscar; the fine acting chops of Emily Blunt, Benicio Del Toro and Josh Brolin; the ever improving director Denis Villeneuve, whose subsequent films Arrival and Blade Runner 2049 cemented his standing as one of the finest directors working in Hollywood. 2018’s Sicario 2: Soldado reunites Sheridan’s writing with Del Toro’s enigmatic Alejandro and Brolin’s bullish yet principled Matt Graver, but minus the other prominent figures with Stefano Sollima behind the camera and Dariusz Wolski on lensing duties. New cast members include Isabela Moner, Matthew Modine, Catherine Keener and Elijah Rodriguez, their presence expanding the scope of this follow-up. Concerns over terrorism and pirating give the film a more global flavour, although these elements serve more as a distraction than contextualisation. The film’s subject matter feels ripped from the headlines as immigration is a prominent feature, much of the film involving Mexicans illegally entering the United States. While there is (currently) no wall, there are certainly obstacles as well as opportunities for those willing to exploit the desperate. Into this potent mix Matt sends Alejandro, with the goal of starting a war between drug cartels. The film is efficiently put together, with several gripping set pieces including a gruelling gun battle on a deserted desert road. Oddly, the film’s more affecting moments are quiet interchanges, especially between Alejandro and Isabel Reyes (Moner), daughter of a cartel head that Alejandro takes custody of. Their relationship is engaging, while Matt’s clashes with his government superior Cynthia Foards (Keener) and Secretary James Riley (Matthew Modine) highlight the political agenda. Unfortunately, these disparate elements are not cohered, while a subplot involving young Mexican-American Miguel Hernandez (Rodriguez) never convinces. Worse, the film lacks the nihilism of the original, and in its final act there are several moments that could be shockingly cruel, but instead the film loses its nerve and takes the narrative beyond its natural conclusion. The border has many interesting stories, but this is one of the lesser ones. 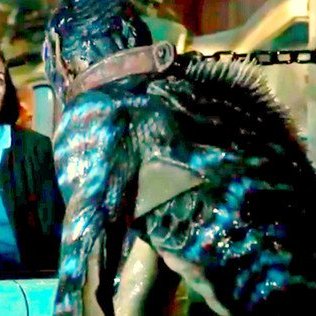 Jiminy jump cuts, we’re half way through the year! 2018 has already given us Brexit shenanigans, the savaging of civil liberties by the US government and sporting events that some people enjoy. In the movie world, we saw a fantasy film win Best Picture, a superhero film with a largely black cast become a box office success, and fan responses to Star Wars reached a new low. The cinematic offerings of 2018 thus far have, by and large, been impressive. From varied award bait to adaptations of video games, novels and stage plays, franchise instalments to indie gems, January to June provided film delights aplenty. Now at the half-year point, I offer my top six of the first six months on 2018.

Traditional as it was, this was the Best Picture nominee that impressed me the most. Were I a member of AMPAS, I might not have voted it for it for political reasons (more on that later), but this is the most impressive film of the year for me so far.

An extraordinary experience, to such an extent that after I saw it, I needed to take a walk just to let it settle. Describing such a exquisitely cinematic experience in words is hard (though I did it anyway), so all I will say here is that you need to see it. Off you go, you can read the rest of this later.

The culmination of ten years of world and story building for Marvel Studios, Infinity War manages to do that thing you don’t expect in a franchise instalment – be surprising. Blending a myriad of characters and narrative threads, and going to strange thematic places, Infinity War continues Marvel’s mastery of the superhero genre.

Were I a member of AMPAS, I would probably have voted for this to win Best Picture, since it is a different sort of nominee that manages to blend the fantastical and the real, the whimsical and the brutal. Guillermo Del Toro has crafted a remarkable oeuvre and, while this is a career highlight, I hope he continues to give us further brilliant pieces of cinema.

Perhaps the oddest film this year, one that I can only recommend in the sense that is an exquisitely crafted piece of cinema. Paul Thomas Anderson’s period romantic drama about an insufferable dressmaker could be sold on its talent, but to view it is to enter into a fully realised and often uncomfortable world.

It says something about a superhero film when you find yourself considering the foreign policy of a fictional country, the society of which is based entirely on a fictional element. It means that the film is working so well on a generic level that you want to apply its conceits to the real world. Marvel’s venture into Afro-futurism combined super-powered thrills with debates between isolationism and interventionism, and without labouring the point struck a blow for cinematic equality.

Only one real stinker so far, and I hope that I don’t see a worse film this year. Red Sparrow had so much potential, considering its subject, its themes and talent. That made the disappointment of watching this tedious, turgid, brutal, nasty and ultimately hollow film all the more crushing.

Will the top (and bottom) films of the year include these entries or others? Time will tell, so keep viewing with Vincent to see where the year goes. 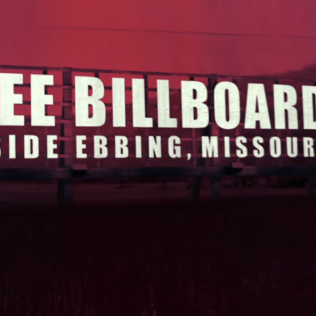 When I saw Jurassic World back in 2015, I thought the franchise should die out. A massive box office return meant that it would not, and the announcement of Jurassic World: Fallen Kingdom raised the question of how would Universal reinvigorate a franchise that seemed exhausted of ideas? Enter director J. A. Bayona, whose career has risen steadily since his feature debut The Orphanage in 2007. Under Bayona’s steady yet unsettling hand, Jurassic World: Fallen Kingdom emerges like a T-Rex from foliage as a film of two halves. The first half is one we have seen before, with standard Jurassic tropes of island, jungle, rain and the occasional dinosaur. The addition of a volcanic eruption adds surprisingly little additional drama, although Bayona excels with some great set pieces. One features riding a humorous riff on the bucking bronco motif, and the other involves a submerged vehicle that is conducted largely in a single take. This sequence is menacingly immersive in all the right ways, and the menacing environment continues in the second half when the film moves into new territory for the franchise. A grand mansion and long subterranean tunnels, as well as judicious use of shadows and Nosferatu-like limbs, imbue the second half of the film with a Gothic milieu. The second half of the film also features effective villains of both the human and saurian variety, as well as some interesting if brief explorations of cloning, the right to live and that trusty stalwart of science fiction, hubris. There are some points where the preposterousness of the story is a little grating – why attempt to retrieve a valuable asset in a tropical storm? Is the nefarious scheme really likely to be profitable? With that much lava, surely the characters would be overcome by poisonous gas? Happily, Bayona’s effective style and the game cast – including the winning chemistry between Chris Pratt and Bryce Dallas Howard – ensure that the viewer spends little time worrying over such details. Meanwhile, there are references to earlier instalments that carry just the right level of knowingness to avoid slipping into parody. Overall, JW: FK takes the franchise in an interesting new direction, and ends with the promise of more, that will hopefully be different as well.