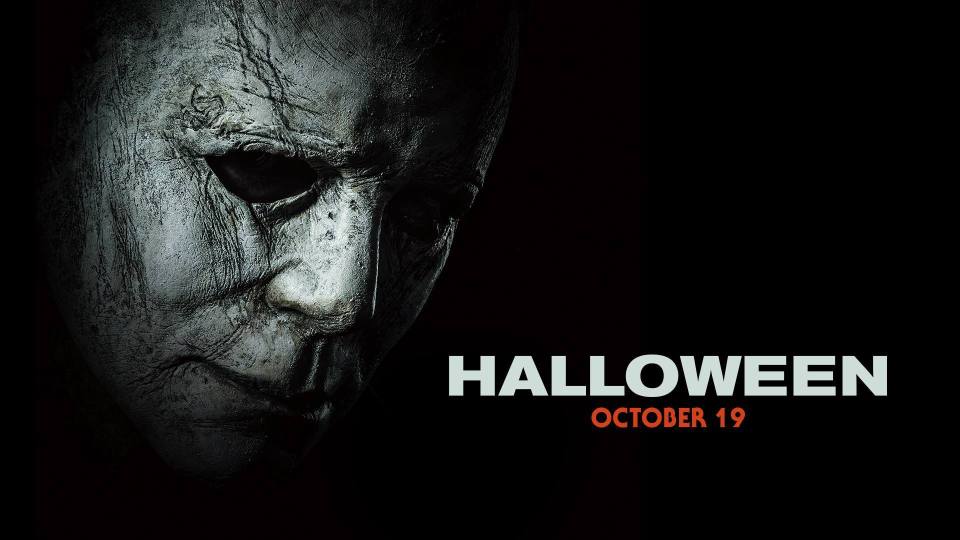 John Carpenter’s Halloween, to give the 1978 film its full title, has an extraordinary legacy. On its release it became the most commercially successful independent film of all time; it helped solidify the elements of the slasher sub-genre that became a staple of 80s cinema, a rite of passage for many a filmgoer and a ripe area for critical study. John Carpenter’s Halloween also spawned a franchise that has continued for forty years, through multiple sequels and remakes. Any new addition to the Halloween lineage, therefore, must strike a balance between acknowledging this legacy and declaring its own identity. David Gordon Green’s Halloween achieves this balance by narratively ignoring every film in the franchise since 1978. This frees Green and his co-writers Jeff Fradley and Danny McBride from worrying about consistency, which is a relief because Michael Myers and Laurie Strode (Jamie Lee Curtis) have been through so many transfigurations that consistency died a grisly death long ago. The new film can therefore focus on its own identity, closely tied to the iconic figures of the series. The latter is as implacable, relentless and silent as ever, as performers James Jude Courtney and Nick Castle convey the unknowable evil that Michael has always represented. It is perhaps a heavy-handed device that the viewer never sees Michael’s face, and the only sounds that we hear from him are heavy breathing, but this does not detract from the imposing Shape that lurks in the frame, his iconic white mask now battered and dirty but still unmistakably menacing. Green stages several set pieces that convey a palatable sense of fear. In one bravura sequence, captured in a single take, Michael enters the frame in the foreground and watches a woman through a window, his reflection in the glass standing in for that of the viewer. Then he moves out of shot, only to reappear in the background while the woman inside the house continues oblivious. The climax of the sequence echoes the beginning and is genuinely shocking, despite being clearly telegraphed. Other set pieces also emphasise Michael’s power and brutality, but the film’s master stroke is its presentation of Laurie. Curtis is fresh and exciting, a sympathetic embodiment of dealing with trauma. Halloween’s willingness to engage with PTSD from a female perspective is a development of the genre’s long-established trope of the Final Girl, as three generations of the Strode family – including Laurie’s daughter Karen (Judy Greer) and granddaughter Allyson (Andi Matichak) – reclaim a narrative too long held by men. Whereas the original Halloween and so many slashers since (not to mention other genres and a little thing called the real world) emphasise male subjugation of women, Halloween 2018 shows female wisdom, ingenuity, compassion and the determination to take control. It might have been even more progressive were the film been written and directed by women, but by committing to this female assertion, Green shows that challenges to patriarchy and its damaging affects, neatly represented by Michael Myers and his ilk, are the responsibility of everyone that wants monstrosity to be contained and curtailed.

What do you need to pluck yourself out of a funk when your entire life has collapsed? If you’re disgraced reporter Eddie Brock (Tom Hardy), you need an extra-terrestrial symbiotic life form with super strength, near-invulnerability and a snarky sense of humour. After the (unfairly) maligned Spider-Man 3, hopes were high that a film focused on Venom would deliver on the character’s potential. Those hopes are summarily dashed with Ruben Fleischer’s chaotic take on the tentacular anti-hero. Eddie Brock is a journalist devoted to the truth, to the exclusion of his employer’s wishes and his partner’s needs. The David and Goliath set up of Eddie VS tech giant Carlton Drake (Riz Ahmed) is cliched and escalates too fast, as Eddie’s life is destroyed when he gets on the wrong side of Drake. Abandoned by his employers as well as fiancée Anne Weying (a criminally underused Michelle Williams), Eddie’s chance for redemption comes in the form of Venom, an organism that bonds with a human host and imbues that host with great power, with which comes great, stop me if you’ve heard this one. Venom follows the typical beats of the superhero genre, offering little we haven’t seen before. Interchanges between Eddie and Venom are sporadically funny but the same device was used in Avengers: Infinity War; the tentacular abilities of the squidgy aliens quickly become overused; Ant-Man and the Wasp made better use of San Francisco as a site for demolition derby. Overall, despite the impressive chompers on our titular anti-hero, Venom’s incoherence means that it lacks bite. But the mid-credits sequence suggests potential for a sequel, so I’ll probably be back for further poisoning. 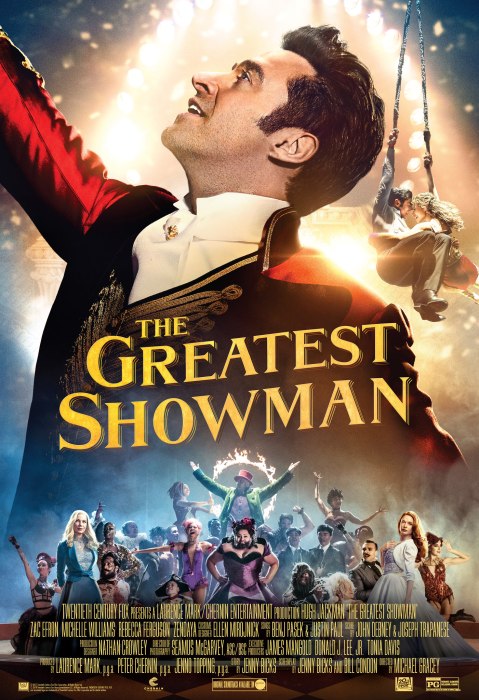 The way we see a film can affect our perception of it. Ideal viewing circumstances can give us a fond memory of a mediocre piece of work. Poor viewing conditions can highlight the strengths of a film if it lets you forget where you are, or highlight the weaknesses if you do not. Such was the case with The Greatest Showman and Rampage, both of which I missed on their theatrical release and caught up with in somewhat unorthodox ways.

For the former, I attended my first Pop-Up Pictures event and saw The Greatest Showman outdoors, sitting on a deck chair with an appreciative but still respectful audience. As the evening wore on it became increasingly cold and I wished I had brought another layer. These far from ideal viewing conditions might have been overcome by a more engaging film, which proved to be the case at a Pop-Up Pictures screening of Terminator 2: Judgment Day. Unfortunately at The Greatest Showman, I found myself getting uncomfortable and not involved in the film. Various dramatic opportunities are missed, such as the significance of fabric and the treatment of those designated as ‘other’, be that due to class, race or physical difference. While the songs have subsequently proved fun to listen to, as part of the film they lack weight, which is a problem with the film overall. A lot of running back and forth fails to convey dramatic importance; tensions between P. T. Barnum (Hugh Jackman), Charity Barnum (Michelle Williams) and Jenny Lind (Rebecca Ferguson) is sorely lacking; romance between Phillip Carlyle (Zac Efron) and Anne Wheeler (Zendaya) is simplistic; the various other characters seem like sketches. Meanwhile, the set design smacks of artifice, and not in a way that suggests the film is making a point about performance and theatricality. In the end, it feels hollow and fake, as The Greatest Showman proves to be far less than the greatest show. 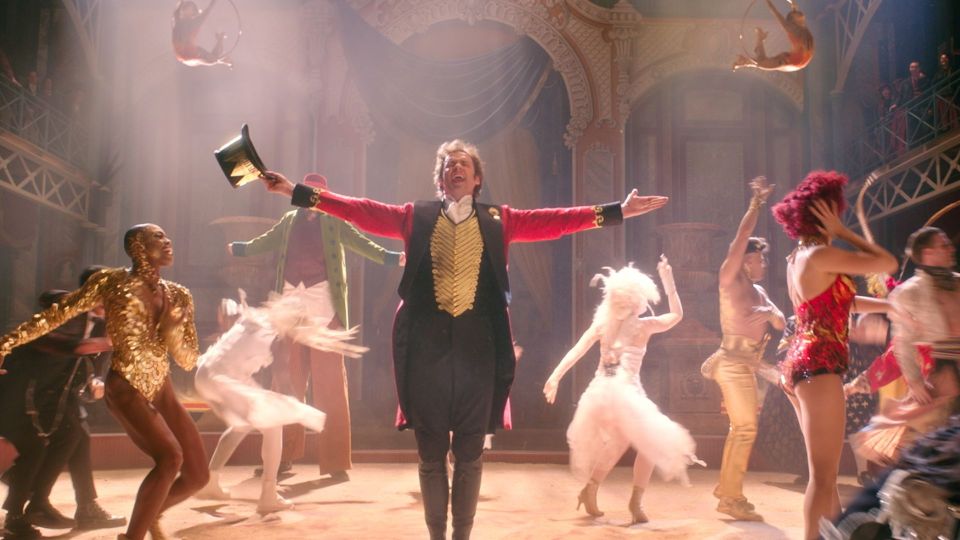 RampageI watched on a train on a tablet, and enjoyed it immensely. This is despite the small viewing device, headphones and regular glare on the screen. Whereas The Greatest Showmanhas pretensions of grandeur that it never successfully meets, Rampageis exactly that – a non-stop, rollicking rampage in which giant animals break things. That is what it says on the tin and that is what you get in spades. I laughed, I cheered (quietly), I applauded (inside). The creature design is effective, director Brad Peyton balances action, plot and humour. All the performers play their roles exactly right, from the boo-hiss villains Claire and Brett Wyden (Malin Ackerman and Jake Lacey) to the maverick federal agent Harvey Russell (Jeffrey Dean Morgan). Playing the scientist who knows what’s going on, Dr Kate Caldwell, Naomie Harris keeps a commendably straight face throughout. As Davis Okoye, Dwayne Johnson balances his trademark wit, charm and charisma with genuine befuddlement over the increasingly ludicrous scenarios and a touching sense of friendship in his interactions with gorilla George (Jason Liles), that Davis talks to through sign language, and seeks to save even as George becomes larger and more destructive. This is the great strength of Rampagethat is sorely lacking in The Greatest Showman: have all the razzle-dazzle you like, but even CGI extravaganzas need a beating heart.