The Invisible Man is like Jaws, in the sense that the film is not about the object of its title. Indeed, the subject of Leigh Whannell’s adaptation of H. G. Wells’ novel is a woman, Cecilia (Elisabeth Moss), who escapes from her abusive and controlling partner Adrian (Oliver Jackson-Cohen) only to find there is more to his influence than meets the eye. Across the film, Cecilia is made to question her perceptions and subjected to horrific psychological torture. Whannell make great use of negative space, making seemingly empty rooms terrifying while sudden appearances are both startling jump scares and nauseating gut punches. Moss dominates the screen with palatable fear as well as evident resolve and ingenuity, and the film’s constant sympathy for Cecilia, as well as its emphasis upon the predatory nature of the male gaze, enables it to be a damning indictment of toxic masculinity as much as a deeply disturbing horror film.

Jordan Peele begins his new film with a long take of a rabbit. Slowly the camera pulls back, revealing many more rabbits. As the camera’s scope widens further, what appears to be a school classroom steadily appears. Nothing overtly horrific happens in this title sequence, yet it is deeply unsettling and disturbing. This sequence is testament to the power of the long take, a stylistic feature common in horror cinema from Halloween and The Shining to It Follows and Hereditary. The long take generates discomfort as the viewer yearns for a cut that could break the tension. In the case of Us, there is little sense of release, as the tension builds even as the film cuts between past – a childhood trauma of Adelaide (Madison Curry) and present – the adult Adelaide (Lupita Nyong’o) on her present-day vacation with husband Gabe (Winston Duke) and children Zora (Shahadi Wright Joseph) and Jason (Evan Alex). The slow burn menace includes a pattern of coincidences, home invasion and confrontation with the uncanny, that which is both familiar and unfamiliar. The tension is punctuated by jump scares, brutal violence and dark humour. Nyong’o is electrifying, delivering two distinct and equally compelling performances. The rest of the performances are very strong, especially as each actor must play two roles: one a civilised human and the other animalistic. When the violence happens, it is sadistic and merciless, as the line between civilized and uncivilized becomes increasingly blurred.

Despite this blurring, Peele never blunts his razor sharp satirical edge. Us is that finest type of horror cinema: steeped in the tropes and techniques of the genre, while using these features for incisive social commentary. Playing on ideas of class much as Get Out played on race, Us is a nightmare version of Karl Marx’s proletariat uprising. Socio-economic structures are targeted as affluence and privilege are attacked. The thematic and narrative doubling is replicated by the film grammar, as images are intercut with spine-tingling precision. The film is an elegant, demonic dance of micro and macro scales, interspersing the real world and allegory, past and present, identities and faces. 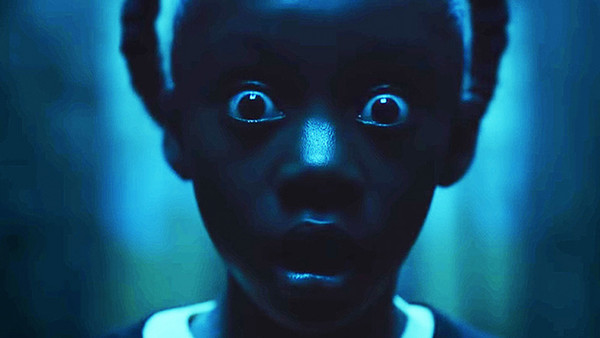