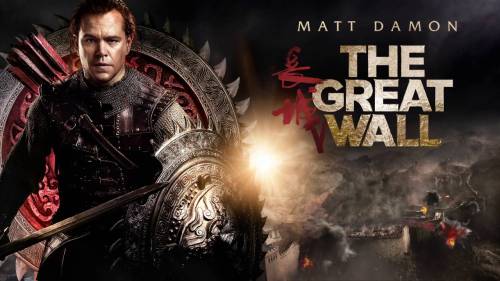 From a symbol of division comes a tale of unity. This is the thesis of The Great Wall, a co-Chinese-American production that takes one of the world’s great monuments and places it at the centre of a story of disparate people coming together. Zhang Yimou’s bombastic bundle of brash bombardment and balletic battle brings western mercenaries William (Matt Damon, experimenting with a variety of accents) and Tovar (Pedro Pascal) to ancient imperial China in search of legendary black (gun) powder. They find the Great Wall garrisoned by the Order of the Nameless One and defending China against the TaoTei, an alien race of monstrous beasts that resemble a cross between a lion and a crocodile. Rapidly drawn into the battle, William and Tovar lend their expertise to those of General Shao (Hanoi Zhang), Strategist Wang (Andy Lau) and Commander Lin (Tian Jing). The film does a decent job of integrating these outsiders into an environment that is both alien yet familiar, and just about avoids the white saviour narrative by making the Chinese characters detailed and not sidelined in favour of the Westerners. Although the action sequences of soldiers VS Tao Tei are stylistically fluid and visually arresting, the film lacks an epic scale or sense of awe, which is surprising considering Zhang’s back catalogue that includes Hero and House of Flying Daggers. Aerial shots of the Wall and surrounding landscape are all too brief, and the combat scenes either take place in long shot or extreme close-up with rapid editing, leaving little time to appreciate the at times breathtaking choreography. While there is spectacle to be enjoyed, the film’s ending is confused and the viewer may be left wanting more. The Great Wall is enjoyable enough, but perhaps ironically lacks real weight.

By vincentmgaine in Uncategorized on March 12, 2017.
← Patriots Day Logan →